The Giant's Causeway, Portrush and the delights of Northern Ireland 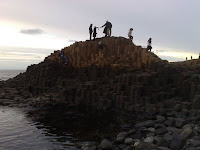 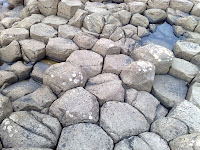 Arrived at George Best Belfast City Airport yesterday courtesy of FlyBe, on time and in good shape, and then got comprehensively lost trying to get the hire car (petrol, not diesel, so I kept stalling it)out of Belfast and onto the Cookstown road. Not helped by the SaNav, which refused to recognise the existence of the BT80 postcode I was heading for.
Anyway. Arrived at Cookstown ('The Retail Capital of Mid-Ulster') to find it has...an M&S Food, a giant Tesco and reputedly the widest streets in Northern Ireland. Not to mention some of the worst traffic. Northern Ireland is rural but heavily populated: well-groomed fields, high hedges and lots of houses. There's absolutely no sense of remoteness.
I called Sandy and his wife Elaine came and rescued me from the temptations of Tesco. They live in an idyllic spot not far away, down a corkscrewing set of one-and-a-half track roads, where nobody brakes for anything oncoming short of a juggernaut and horns are sounded all the time, mainly, it seemed to me, for fun. It's a bit like driving in Madrid, only grassier.
Lunch (I had imported half a dozen well-fired Glasgow rolls) and then we headed off to the Giant's Causeway, which is one of those natural phenomena that lives up to expectations in every way. It's really hard to believe that the rock formations are not man-made, and it goes on and on. It was genuinely thrilling to see it.
Tea in Portrush, the perjink (how do you spell that) Blackpool of Ulster, at a really excellent restaurant called 55 North. Slow-cooked lamb shank was splendid.
And Cuillin the husky-labrador cross got the bone.
Posted by Tom Morton at 11:11 am