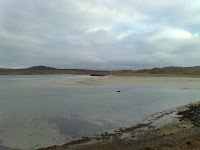 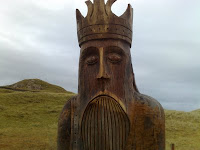 I kept seeing place names that were familiar from Shetland: Mangersta, Mealista, Kirkibost (same as Kirkibister); the photographer I'm working with, John Maclean, told me that most Lewis place names are Norse in origin, though many have been Gaelicised. Much of Lewis even looks like Shetland, in its bleak bogland. But it's a lot more mountainous and the beaches are on a bigger, blonder scale.

The oak sculpture of a Lewis Chessman is by Stephen Hayward, and is sited near where that legendary set was found, in a stone chest covered by a sand dune. The beach at Ardriol, seen here from Carnish, is fantastic.

I'm working on a magazine story in Lewis and I've been asked not to reveal anything about it, which is understandable, but annoying: It's a truly fantastic tale. All will be revealed, eventually.
Posted by Tom Morton at 7:51 pm