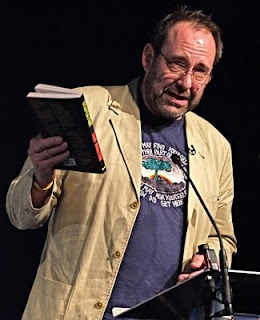 This picture was sneakily snapped by my pal Stewart Cunningham at the Edinburgh Book Festival yesterday, during my reading/Q&A with fellow Mainstream author Alan Clements.
The bookfest is massive these days, much grown and gentrified since my last visit there, when I was asked to 'hot bed' (share a bedroom, though at, ahem, different times) with Meg Henderson. Then, there was the Spiegeltent and some, it seemed to me, Scout marquees. Nowadays it's a bit like being in a branch of Borders, only under canvas, and all the auditoria are supremely comfortable.
Authors have a yurt, which means none of the sofas have backs, and you have to sprawl in an ungainly yet somehow artistic fashion. There is free whisky, though. Highland Park 12-year-old.
Finally, after years of down-the-line interviews, got to meet Ian Rankin - who listens to the show - and Kirsty Wark, wife of my fellow troubador Mr Clements. Saw a Gruffalo (tamer than you think), then it was off to to read and natter about guns, Land Rovers, the CIA and various other topics, all handled by our chairman Bob McDevitt. About 100 folk paid good money to come and hear us , and a good dozen or so bought books afterwards, so that was pretty heartening. Nice people. A quick dram with my publisher Bill, and then a descent into Whigham's Wine Cellars with Stewart, Maggie and an old friend and colleague, Ian Bell. Outside and who's this? Shetland writer Robert Alan Jamieson, with an Italian professor of poetry. Edinburgh's such a village.
Today, Monday, I came back through on the train to conduct some interviews for the alcohol programmes I'm currently working on. Moving and sobering they were too, with folk at the Lothian and Edinburgh Abstinence Program. No messing about there with 'moderate drinking'. It's the dry way or the highway. And the evidence is - it's the only thing that works.
Now to The Tun at Holyrood for the afternoon radio show, followed by another alcohol-related interview and various other east-coast shenanigans I won't bore you with. Suffice to say that I'm already missing Lerwick's excellent choice of sandwiches. I've just had a truly awful tuna mayonnaise roll with bad cucumber. I'm pining for Faerdie-Maet!
Posted by Tom Morton at 12:38 pm

Tom - many thanks for signing my copy of the book - my sister and I commented on your T shirt - sure you remember.

I have to say my favourite part of the event was the look on Alan Clements' face when the chap in the audience said something along the lines of "I've got this cracking fantasy about your wife and Victoria Wood on a desert island....." How you both maintained composure is a wonder to me. Thanks for an interesting event, Ross V