The strange euphoria of railway stations... 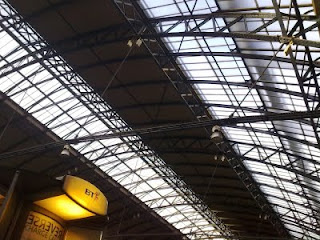 A strange, calm sense of wellbeing comes over me in railway stations. If, that is, I'm in plenty of time for whatever train I'm supposed to be catching. It's even better if I'm not actually catching a train at all. Not that I make a habit of just loitering on railway concourses. Stations are good places to meet, as tonight when I had to rendezvous with a producer so we could do some interviews for the Drinking For Scotland series.

But Costa in Glasgow's Queen Street Station remains one of the great locations for just...sitting and watching the world go by. No need to read a paper. You're waiting. So is everybody else. You're invisible. And so much going on. The young, cutting-edge trendy, enormously in lust couple canoodling, him in a Dizzee Rascal baseball cap, her in a hijab; the strange number of old men in cowboy hats; the furtive men systematically checking the public telephones for change. Greetings, meetings, farewells.

The odd calmness I feel comes from childhood, I think. Trains meant movement, travel, Grannies' houses, Largs, holidays, trips. Other Places. Other people. I loved trains, always, and I still do. Late trains, busy trains. Waiting for trains. Waiting near trains. They trigger something deep, pleasurable, the best bits of the past. Those great red pneumatic buffers at Central come to mind. No train ever touched them. How I longed for one to just...brush against them, gently. Just to see if they worked.

Anyway, Ian arrives, and we're off to Springburn to interview some of Glasgow's truly impressive paramedics. Next week I'm off to Paris with Susan and Martha. By train. I can hardly wait.
Posted by Tom Morton at 9:21 pm