To the Wigtown Book Festival, and then back to Glasgow via The Queen's Way... 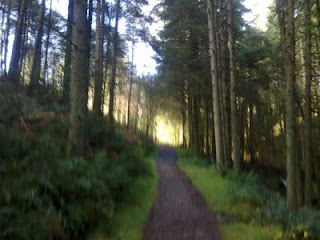 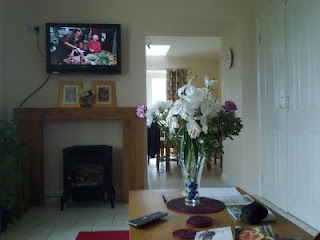 It was too much, the overnight boat trip from Shetland, followed by a thrash down the road to Glasgow, doing the show, and then another drive down to Wigtown, for the annual book festival. I should probably have had a quiet night in then, but a gathering of whisky writers forced me to partake of...Freixenet Cava, red wine and yes, whisky. Or to be precise, a Charles Maclean guided tasking of Irish whiskeys, which was a revelation. Redbreast! Never has Paddy's tasted so awful.

Then it was off to the lovely Glenturk Farm Cottages, a converted steading which gave me some ideas for our own unused (except for motorbike storage) barns back home. That's a picture of the lounge/kitchen area. To sleep.

Saturday. Bacon rolls, loads of coffee, then telly. Recuperation of a sort. Wigtown was jumping, when I finally tore myself away from The Hairy Bakers and ambled through the heavy showers to encounter Scotland's Booktown in full festive fig. I took in a session with Alan Grant, writer of Batman, Judge Dredd and much else, and met up with Broons supremo Dave Donaldson, who was due to host a Broons event next day. We went to the 'Author's Retreat' and availed ourselves of the fantastic lobster buffet for which this festival has become famous. Yum!

A bit of preparation for my own gig, and then off to the Bladnoch Distillery for the launch of Raymond Armstrong's 8-year-old whisky. It's a cracker, a really distinctive lowland malt, fresh and zingy. Ulster/Scots folk band featuring a Lambeg drum performed, a first for me. Time for the 'Tom Morton's Drinking for Scotland' show.

I had major problems sorting out any kind of sound with the in-house PA system, and eventually, despite the size of the hall and a fairly large audience, had to go for a totally acoustic performance. One or two people at the back had difficulty hearing me speak (apologies), but the singing came over, I think, pretty well. We're too used to amplification, I think. The drinks (Irn Bru, Buckfast, Scotsmac and the Bladnoch 8) were meant to take us on a trip through Scotland's various libations, ending with the glories of the local spirit. The poems and songs seemed to go down pretty well. I'm hoping to record the whole show on video and have it online sometime next month. Maybe.

Sold a heap of books, which was great. Lovely audience, and splendid to meet so many enthusiastic Radio Scotland listeners. But knackered, so a comparatively early and moderate night. Not for me the Buckfast cocktails! I did find out, however, to my complete surprise, and Dave's, that I was meant to host Mr Donaldson's Broons show next day. OK, no problem.

Sunday morning, and publisher Neil Wilson, also staying at Glenturk, cooks a massive breakfast. Black Pudding. Restraint must be exercised. The Glenturk cottages were built following the farm's entire stock of cattle having to be destroyed following the foot and mouth epidemic. This must have been a bitter blow as Glenturk is legendary for the quality of its cattle, wining multiple awards at the Royal Highland Show. Fortunately, they're back in the kye business, and winning awards again.

Lunch at the Ploughman's in Wigtown (very good - and they're sponsoring the Broons gig) and Dave and I lay down some ground rules for the show. Then, armed with a life-size cut-out of Maw Broon, we spend an hour chatting about Dudley D Watkins, RD Low and Dave's own career (writing the Broons since 1962. Spot Brian Keenan in the signing tent. Then it's off to Glasgow up the Queen's Way from Newton Stewart to New Galloway and Ayr. It's an absolutely beautiful drive.

Wigtown is a great festival and this year went, I think really well. Many thanks to all involved for their sterling efforts!
Posted by Tom Morton at 8:45 pm

Tom, Scotland needs you back in YOUR early afternoon spot, URGENTLY as it has been given the Lorraine Kelly/GMTV brush and the taste of the music has gone somewhere West of Rockall!
Help, will you please come back, all is forgive from the Workshop at the Caravan site here at Quarryhill, near Blairgowrie. We cannot take any more,and are about to move to Radio 2 or even Radio Tay - at least they play sounds that are recognisably musical!

We hope your abscence is short.Please Come back NOW!
SandyMain