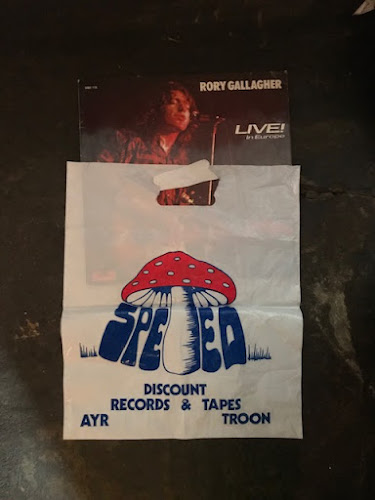 A few cream deco tiles are all that remain of the George Cinema, Portland Street, Troon, which closed in 1974 and was finally demolished in 1986.They frame the frontages of The Lavender Room, Corum Estate Agency, The Card Warehouse and a small, empty shop unit which was once the gateway to another world. At first fearful and awed, eventually casual and at ease with the patchouli vapours, fearsome volume and ultracool, astonishingly hirsute proprietors, we would hang out there after school in our blindingly purple Marr College blazers. Speed Records.
I can’t be sure, but I think Speed opened in 1970, gradually usurping the nearby electrical retailer Fairbairns as the place to buy vinyl. Further along towards the sea, in West Portland Street, was Bethany Hall, the Brethren assembly our family attended, more than religiously. There, on Sundays and many, too many other days of the week, lay the way to heaven. Speed (that name! That mushroom logo!) was a direct portal to The Other Place, and as such devilishly attractive.
What did I buy there? As a teenager I could afford very little in the way of full price albums. I’d discovered that Boyds, a dark and threatening newsagents (assistants in nylon housecoats) on the other side of the road, sold ex-jukebox singles and occasional deleted LPs. It was there I found and bought This Is Blues, a superb compilation of electric blues released on the Sue label and curated by Guy Stevens for Island. I still have it. The badly-copied-from-78 version of It Hurts Me Too by Elmore James, that scary slide guitar, the swoosh of static and needle-worn grooves...a love was born.
And that led to the two actual purchases from Speed I can remember, both records by Rory Gallagher: Live in Europe in 1972 and the following year Blueprint, which I took back and had replaced as it was warped. Arguably the best live rock album ever made. And the worst follow-up. I hate that electric piano.
Speed opened a branch in Ayr, which continued into punk and beyond. The Troon shop closed, but by then I was in Glasgow, flipping through the racks in Listen, 23rd Precinct and that treasury of used obscurities, Lost Chord in its original, almost mirage-like Ibrox location.
But that’s another story. Today I’m remembering Speed because a long-lost fellow Marr pupil, Ian Gunn, noticed an online reference to my affection for the place, remembered he had one of the shop’s carrier bags in his loft, dug it out and sent it to me.
History. Mystery. A way out of small town Ayrshire. A container for dreams, ambitions, and the thrilling magic of The Biggest Noise. 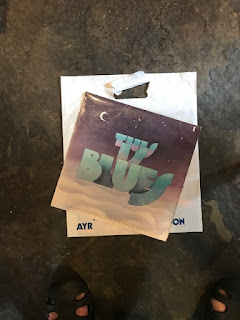