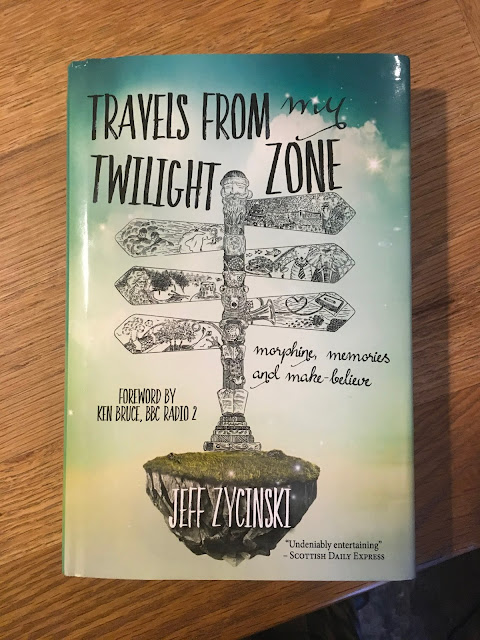 The best advice Jeff Zycinski ever gave me was to look for punchlines. He is a connoisseur of comedy, a theoretician of stand up as well as sometime practitioner, in the sticky guise of Johnny Sellotape.

“Punchlines, Tom. You tell stories. But they don’t have punchlines.” And afterwards, I began to tighten up my meandering on-air waffle. Slightly. Stories need a beginning, a middle and an end. With possibly a tease-ahead and a twist.

Jeff’s own narrative couldn't model more how to construct a certain kind of dark comedy routine: Did you hear about the Head of BBC Radio Scotland who took generous redundancy in his 50s? Wrote a successful and witty memoir, set up a training, public speaking and educational consultancy, then got squamous cell carcinoma...of the tongue? No? Well, he had an operation, right in the middle of the Corona crisis. It went brilliantly well. He sat down and wrote another very funny and moving book about the experience of recovery. Learned to speak again. (Tease ahead: this is actually a review).

But here’s the twist: before publication, it turned out they hadn’t removed all the cancer. He had to have another operation.

You want punchlines, we got punchlines. He’s alive, well, and has a book to promote.

Some people will do anything for publicity.

I’ve known Jeff a long time. He was head hunted to lead the team which launched the first Tom Morton Show on BBC Radio Scotland nigh on 30 years ago, and it’s fair to say we had a few adventures during the tumultuous period before (spoiler alert) I got cancer and left the BBC. Much later, my melanoma having been excised, I came back, just before Jeff ascended to the headship vacated by my and his old pal Maggie Cunningham. Then I had a heart attack and left again. Illness, it would appear, stalks us both like a vengeful researcher sacked for taking too long a lunch three days running at the Gellions in Inverness (although this has never happened).

I could tell you stories about the things Jeff and I got up to in the days when money was no object at Radio Scotland, and we would find ourselves chasing Jay Leno down California’s Pacific Coast Highway in a Chevrolet Corvette Stingray; fondling Gregory Peck’s Oscar statuette; battling to save our careers after the late Ivor Cutler and a Russian circus troupe nearly destroyed them live on air. The kazoo orchestras, the fancy dress Christmas staff parties, that business with the bucket and the rotten fish…the live caviar and vodka tasting...

But clearly, that would break all kinds of BBC rules. Besides, many of those tales are in his first book.

This new hardback (also available in the usual digital formats) is called Travels from my Twilight Zone: Morphine, Memories and Make-believe. Its conceit is that during his drug-laden, pain-killing recovery from cancer surgery, all kinds of memories and old stories became mixed up in Jeff’s mind and later became this book. It’s actually a powerfully bittersweet tribute to a unique upbringing in Easterhouse, and a collection of some of Jeff’s punchline-adorned routines from his days writing for the Tom Morton Show and as a performer.

The story of his cancer diagnosis, surgery and recovery is told without self-pity, with great grace and, as you’d expect, humour. Puns work in odd ways - as punctuation, the puncturing of tragedy, and as a sideways acknowledgement of both the deep sadness and ridiculous nature of a situation. He deploys them wisely. But there are moments of piercing, sometimes overwhelming emotion. The image of Jeff’s scientist wife Anne taking careful notes as the Dundee  surgeon discusses what he’s going to do will live with me forever. That scene makes her for me the real heroine of this book.

There is nothing, really,  in Scottish literature like the story of Jeff’s upbringing in Glasgow’s Easterhouse, the youngest of eight children. It’s like Andrew O’Hagan’s The Missing rewritten by Chic Murray and Cliff Hanley. Jeff’s father, a Polish seaman during World War Two who settled in Scotland, emerges as an extraordinary character, and Jeff’s sometimes stormy relationship with him is drawn with great humour and tenderness.  Family holidays in a Carnoustie hut (a useful corrective to the current fashionable notion of “hutting”) are beautifully drawn, reminiscent at times of Tim Winton’s descriptions of a similar holiday shed his family had on the West coast of Australia. Though with fewer rats. As for the camper van...I always wondered why Jeff put up with my motorhome obsession during the Dolphinsludge years.

Easterhouse during its new-built halcyon days is initially a glorious childhood paradise which gradually decays into a threatening dystopia. The breakdown of Jeff’s education and his battle out of that to media executivedom is a triumph of will and storytelling. That tale about the swastikas...and Germany... but that would be to reveal a twist. And a punchline.

Meanwhile, a story of my own:  Jeff’s fascination with his Polish roots is explored in TFMTZ, but I would suggest the moment that really kicked off was one night in the foyer of the Copthorne Hotel in Aberdeen in the early noughties. I met Jeff there as he was checking in, and the receptionist was asking his name.

“Zycinski,” he replied. And, with the weariness born of many, many requests for the spelling, he said “That’s Z-Y-C…” he got no further.

“It is NOT ‘Zycinski’ the receptionist exploded, in what was clearly an Eastern European, undoubtedly Polish accent. “It is ZHYZHINSKEE!” SAY IT PROPERLY!”

Since then, I always have.

Travels from my Twilight Zone: Morphine, Memories and Make-believe.