The slow, ugly death of DAB, dodgy design, and how I became a radio transmitter as well as broadcaster 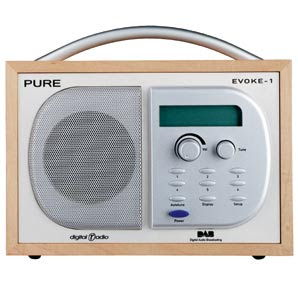 Digital Audio Broadcasting - DAB - is dead technology, and the first nail in its blond-wood coffin was not the statement yesterday by the beleaguered head of commercial broadcaster GCAP (closing two digital 'stations' and selling its stake in one of the main DAB broadcasting thingies), and not even David Hepworth's article in last month's Word Magazine

It was those boxes. And they were/are interesting boxes, those Pure Evoke (what a STUPID name) DAB radios. In retrospect they had/have 'future demise' written all over them.

And friends, I bought one. Well, I bought one as a present for a family member who lives in one of the isolated urban pockets of DAB reception. Only after I bought it did I discover it was, of all things, MONO (at a time when you could buy a stereo FM radio with built in CD for approximately five old pennies. And that you needed to buy a matching extension box to turn it into something that looked like one of those Russian hi-fis you used to get from Woolworths. And that it sounded like a crystal set anyway. Sure, an LCD display told you what station you were listening to. But car radios had been doing that for years.

Because whoever designed those Pure Boke radios had a brainwave: It's new and unfriendly tech, he (definitely a he) thought. Let's clad it in...wood! And brushed aluminium, sort of 1940's/50s,like in that Terry Gilliam film, Brazil. Ignoring the fact that the post-modern, valve-driven society in Brazil is both decaying and hugely threatening. This was something that looked like a radio in the same way the warning signs for roadside GATSO speed cameras show a symbol of an ancient plate camera with a bellows. It apologised for what it was.

It was big, and clumsy, too, though you could get Walkman-style versions at enormous cost (now much cheaper, but not 99p, like FM personals). And besides, all UK digital stations were available through your digital telly.

Then bingo, we all (or most of us) got broadband, wireless broadband. Recognise that wee word? 'Wireless'? Sound familiar?) Now we can listen to every conceivable radio station while we're working (headphones, sir, headphones). Meanwhile people like Logik (who make DAB receivers as well, not necessarily out of wood) start bringing out the Reciva, which is admittedly a bit like a DAB receiver, in that it's mono and not portable, but brings all the stations on the internet (and that's ZILLIONS more than DAB) into your kitchen, bedroom or living room, using wi-fi. It looks not like a twee imitation of a Garrison Keillor radio romance 'wireless', but a piece of uncompromisingly scientific equipment. It looks like a wave generator from a lab, or a defibrillator, or a Geiger counter. It's deliberately intimidating. At a pinch, it looks as if it might save your life. Or ruin it. And look at the name: 'Logik Reciva' - ugly, technical, modernist, nerdy - as compared to 'Pure Evoke' - nostalgic, backward looking, essentially fascistic.

At first, my Logik was annoyingly prone to cutting out. We live in a big old house with thick walls, and our wi-fi router wasn't powerful enough. So I decided to search for some kind of booster. Suddenly, on eBay, I glimpsed the possibility of becoming an (unlicensed) radio transmitter. You can get wi-fi boosters with a range of 10 kilometres! Holy Pirate Radio! A Belkin for £30 plugged into a wall socket and gave us complete household coverage, plus the garden and a neighbouring field. Now we are wi-fi'd to the max. DAB? you must be joking. Not that we could ever get DAB within three hundred miles of where I type.

And I've sold, so far, three Logik Recivas (what a stupid name). People visit, I demonstrate what it can do (here's East Village Radio in New York City, here's EVERY HEAVY METAL STATION IN THE WORLD!) they order one. For £38.50. And I'm not even on commission.

DAB? DOA, I'm afraid. And that's without even talking about cars.
Posted by Tom Morton at 8:53 am

Most disappointed in your BBC Online colleagues posting this extremely pro DAB radio article online 11th Feb - but of course the BBC’s has vested interest.

If it’s come to the stage that the major benefits of DAB radio is that there is no “twiddling a dial to tune in” and the “choice of more stations” - it’s doomed. Now just when did you last see a recent and half decent FM tuner without presets? And if this choice is anything like the dire dross and repeats that are broadcast on the new BBC digital TV channels, no thanks. And anyway, as you say, that argument is more than shot down with the huge global internet radio selection.

The only thing I can’t understand is why BBC haven’t pushed the Government to try and re-introduce a Radio License (or at least increase it‘s proportion in the License Fee) though I suspect it’s too late and there are just too many other alternative sources and funding models available nowadays.

The DAB advocates never tell you about the lower bit rate levels and so the lower quality that the Beeb are broadcasting. Notice how the alleged 'CD quality' label has disappeared? That is unlike you and me, if you are in a reception area and can get it at all …..

Or heard about the new DAB+ (2010?) - and that is not compatible with most of the present DAB radio's? I bet a very large percentage of the new DAB owners that bought in the BBC Christmas ‘advertising’ campaign haven’t either.

Even a ‘Radio Times’ featured an article/letter saying DAB is the new medium wave, see the ‘Sound Off’ panel, and read all about it here people

You started the ball rolling on your blog last year.

I then got Santa to bring a Logik Reciva over from London to Switzerland and since then have ben raving about it to any expats who will listen. Best thing ever.