How are the mighty (nearly) fallen! Toyotas, horses and Citroens in the snow 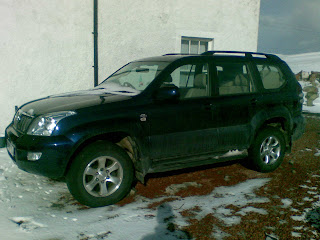 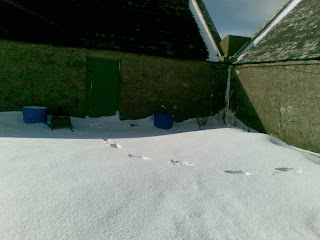 Yesterday's weather deteriorated during the programme until, at 4.00pm, I received a call from Susan to say she was stuck on what is known locally as 'The Footpath' - not a footpath at all but a steep road between Ollaberry and Ronas Voe. This despite her super-tough Landcruiser 4X4, which suffered the ignominy of being hauled out by, variously, a gritter lorry, a pick-up truck (probably a Toyota Hi-Lux, though possibly a Mitsubishi L200) and a tractor. She sends heartfelt thanks to all concerned. And is off to buy new tyres, her (legal, just) Dunlop AT20s clearly not being up to the job.
As it happens, I had to drive all the way to Sumburgh Airport to pick up Magnus, who had flown in for the Easter holidays...that was a 130-mile round trip in frequently horrendous conditions, including a complete white-out at Levenwick. The Citroen C4 (new acquisition) was amazingly agile throughout, even in deep snow...that 1.6 diesel engine has the torque and the front wheel drive walks the walk. And new tyres probably helped.
Back in Hillswick, so far the promised new downfall of heavy snow has not materialised, and the roads have been cleared, for the most part. Kilkerran the Connemara horse (AKA Crofty or Crafty) is a new addition to the local landscape and seems to be enjoying the conditions. He's soon to be joined by a rescued Shetland pony, which is apparently knee-high to the smallest snow drift. However, Shetland ponies can, in my experience, survive anything, including being hit by large four wheel drive vehicles. The ponies walk away, unconcerned for the most part. The 4X4s are usually write-offs.
Posted by Tom Morton at 9:39 am