End of the Rayburn 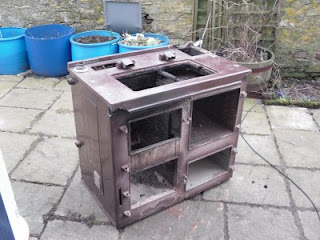 I always knew that removing the old Rayburn Supreme range from our kitchen was going to be a serious piece of heavy metal motion. Had to be done, though. The thing is over 40 years old, the seals have gone, it's lately been refusing to burn properly  (solid fuel; peat, natch) and sometime this week a new, eBay-purchased Haas &Sohn cooker will be arriving to take its place. At roughly one quarter the cost of a replacement Rayburn. We have free fuel, courtesy of our peat banks, and while it would be nice to try and run our central heating system from peat, the cost of doing so was going to be astronomical. Not to mention persuading a plumber to actually do it.

So we're simply installing a solid-fuel cooker. The Haas & Sohn is not the couthy, retro, gorgeous thing a Rayburn  or an Aga is. It's a somewhat prim, teutonic, angular item. But it was cheap and it allegedly works very well. It will take the edge off the manse's essential presbyterian chill, cutting down the oil bills. And I'll be able to bake bread in it.

Our old Rayburn has some tales to tell. It allegedly provided succour from two-foot deep flooding for two men working on the manse during the great tidal surge of 1970-something. It is the most hideous colour ever designed by Aga (brown fading to grey; it's called sable) and we once got the oven so hot during a storm it cooked a pizza from frozen in 30 seconds.

Truth to tell, it has been a good old friend in times of great freezingness, especially during power cuts. But it's not going far. In fact, it's  so heavy I can't see it being possible to move it far, unless I smash it bits first. The idea is to turn it into a kind of outdoor kiln/oven, for super-lengthy peat-fired cookathons involving  bits of sheep, cow, goose or hen.

It took James and myself an hour of applied physics (levers and ramps) not to mention a great of inter-generational huffing and puffing, to get the Rayburn over the doorstep and outside. And that's as far as it's going for the moment. Susan can move it the rest of the way...

I bet you will miss it. Its a communal thing the Rayburn...for me holidays to Scarp and then Ahmmnusuidhe with the Granny, huge hands, water always on the boil baking scones and boiling something for soup. More recently the focal point at my folks, things in the oven and always making the kitchen the hoemly, family area. Gone but not forgotten
I suspect.

Our poor old Rayburn is on its way out too, leaking boiler. Not keen on the Haas & Sohn's looks, but a good price there! We're hopefully going for the Esse Lionheart (but don;t tell MrL)

What a shame, Tom, but you seem to take it in stride. German products are usually very well designed and built, so it may still prove to be a worthy "heir"...! I hope our Aga (solid-fuel, coke, as we don't have peat here) will last many years still, although it's quite an old thing, about 70 years old - the fact that it's still in working order is quite a quality statement!