The new stove is in! 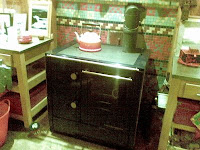 It was going to be thousands and THOUSANDS of pounds for a new Rayburn, and thousands more to have it connected to the (oil-fired) central heating system. After long and anguished conversations with plumbers and various other mystics, we settled on replacing the old,worn-out (rusted out) Rayburn with a stand-alone solid fuel cooker/stove. Still looked like costing megathousands, until a browse through eBay threw up this German Haas + Sohn range, new/old stock, half price, £599 with FREE DELIVERY (as far as Aberdeen). No back boiler, lacks the retro farmhouse look, but has a massive oven, burns peat and seems to be a default purchase for thousands of German families.

A lot of people are moving back to solid fuel, I know, and it's interesting that eBay has become a forum for small firms importing European stoves that cost a fraction of the UK Agas and Rayburns (same company). I notice what looks like a Haas + Sohn with a back boiler that drives six radiators for £800, which is a snip. And there are Italian stoves available too. Anyway, whoever they are, the Outdoor Coooker Company came up trumps for us.

I know that £599 seems a lot, but we can get our own peat, which means a free heat source. And a bit of investigation with open doors showed that heating the heart of the house with peat (not to mention cooking with it sometimes) would take a considerable edge off the utilities bill. Global warming? Err...

Anyway, many thanks to Northwards Shipping for whisking the stove up from Aberdeen and onwards to the house. The driver, James and myself got it in without anything like the hassle we had in removing the Rayburn. Duncan has just fitted the flue, and once the fire cement dries, we're ready to rock'n'roll.

I think it looks great. Tomorrow we'll know if it works!
Posted by Tom Morton at 11:17 am