There and back in The Mighty Landcruiser 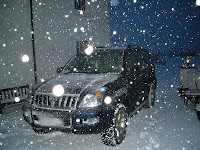 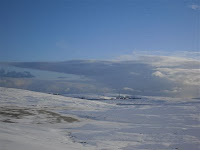 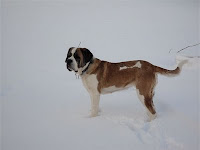 Tricky old trip into Lerwick - Scandinavian conditions, with hard packed snow on the roads most of the way. But the Toyota did what it undoubtedly says on its tin, thanks to the BF Goodrich All-Terrain tyres (actually, the original ones were rubbish).

Dropped Susan at the hospital, then up to North Eastern Farmers for dog and cat food in bulk. When you have a St Bernard, bulk is the only way. Tesco for basics, and then to BBC Radio Shetland. Good and very busy show, main theme being the nostalgia of smells. Some fantastic tales...you can hear it for seven days here.


Drove home alone, as Susan had to take one of the NHS Subaru Foresters up for her associate to use. Great cars, wish I still had mine. Arrived to find a blizzard and both weans (18 and 14) engaged in a sledge race. More of this tomorrow, but frankly, that's enough snow pictures.

Oh, and that's the Sullom Voe Oil Terminal, way past the frozen loch in the distance. If you really believe it's Scotland's oil, that's where the majority of it is dealt with. In other words, it's arguably not Scotland's oil; it's Shetland's...
Posted by Tom Morton at 6:33 pm

How are you? Up to your eyebrows in permafrost?

Had a surreal experience down here in cosy Dumfries. On January 25th the Bard's 250th was celebrated by thousands of us Doonhamers converging in processions to the Whitesands on the River Nith. Each parade was labelled by the organisers with a colour. At the last minute, Alex Salmond joined our entourage to process through the town proudly waving his (cardboard) saltire. Our parade was colour coded with the unlikely shade of orange. Possibly the first and last time I'll take part in an orange walk with the First Minister.