Home after a flying visit south, courtesy of FlyBe, the airline that charges you an extra ten quid for carrying your guitar. Still, it all worked out rather cheaper than the boat would have been, even including a hire car (assuming I'd booked a cabin on NorthLink) and was much, much less tiring.

Back to beautiful weather (which continues this morning, at least for the next five minutes) and to find The Caravan of Rock parked in The Beatcroft's precincts, one tyre flat. It was there for The Booze Cruise on Saturday, an event at the village hall involving an entirely fictitious 'cruise' to several different countries,  featuring  music, food and, err...dramatic performances from said destinations. all without leaving Hillswick. Australia, it seems, was one of the stops.

Then a splendid dinner at Stacey and Kieran's house, the lounge window of which features this view. 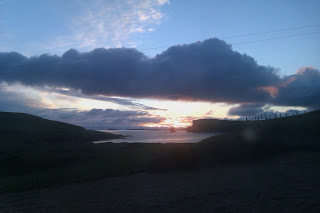 Sometimes the best geography in the world is...quite near at hand.
Posted by Tom Morton at 9:26 am