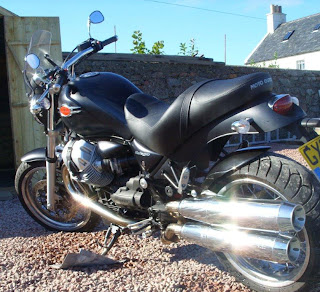 Well, That's six weeks or so since I took possession of the Bellagio down in Norfolk, and almost a month since I arrived home after the 3500-mile excesses of The Barnard Challenge. Susan has reconciled herself to the existence of the Guzzi, and even ordered a special shed for it. Which James put together and into which the Bellagio fits. Just.

This is the weekend I've decided to keep the bike, unless financial crises intervene. Certainly until next year, when any major touring projects may force a rethink. Or an addition to the fleet...

The Bellagio is extravagantly good looking. It's part cruiser, part street-dragster. One of the benefits of that huge lump of V-twin engine is that it stops any thoughts of a feet-forward daft Harley riding position. But it's big and light and responsive enough to (just about) tour on. It managed the full-on motorway thrash from Leicester to Inverness relatively easily, though the lack of a screen left me almost paralysed with cold on a midnight A9. It now has a (very small) screen, which cost £132, and that takes some wind blast off the chest. But it's a stress-free ride in many ways, easy on the knees (unlike the scintillating Triumph Street Triple R I used for most of the Barnard Challenge; it went like a space rocket but was very cramped) but hard on the wrists and thumbs.

The Guzzi makes a very nice noise - that V-twin thump is addictive - but this is a new take on an old design: Four spark plugs, short stroke, 75 bhp in a light chassis. It will leave any Harley Sportster for dead and indeed out handle all Harleys. But is that enough? You have to cane the engine to get the best performance out of it. It's not effortless, and the six gearbox ratios seem weirdly ill-matched. Best for overtaking is fourth. Sixth is virtually an overdrive.

Handling is occasionally lumpy and twitchy, especially on poor surfaces. It's better heavily loaded. The shaft drive is the worst I've ever experienced (compared to a Kawasaki GTR1000, my ancient Suzuki GS and BMWs of all kinds), despite the much vaunted CARC system: backlash at slow speeds is terrible, making traffic a jerky and thumb-savaging business. Vibration is, as you'd expect, severe, but not as a bad as a Harley.

Other problems? The horrendous clattering when you pull in the clutch lever on idle is a Guzzi hallmark, but initially...disturbing. You get used to it. Range is disappointing. 150 miles from what is a deceptively small tank.

But. It will sit at 80-90 mph in absolute stability, and do so very comfortably for the rider (where legally possible!). The engine, which has done 2900 miles, should be good for at least 25 times that. Finish is excellent, with the exception of some badly-chromed screws (Piaggio); brakes are good (Brembo); suspension is high quality (Marzocchi). It came with the comfy twin seat and a rear hugger, and it cost much less than an equivalent 2007 Sportster. It's by far the better bike.

Did I say it was good looking? Actually, I think it's breathtaking. And if I do keep it,there's the matching panniers and tank bag, the Bellagio helmet, the racing exhausts...all possible Christmas presents...

The truth is, I've wanted a Guzzi since I was a wee boy, and saw one, probably an early California, cruising down the main drag in Playa de Aro, Spain, ridden, helmetless, by a guy with a beautiful blonde woman on the pillion.

And in the end, I fear, that's defined motorcycling for me since. I'm shallow that way.
Posted by Tom Morton at 2:19 pm

Quick comment on range. I have notice the reserve light comes on early (at about 6.5litres) and finding this on my own Bellagio I range the tank drive whilst touring.

A range of 343km which included two crossing of the 15km steep,windy hills and 60km of motorway covered in traffic lights. Thats over 200miles in yard stick measure.