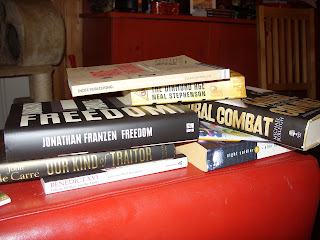 Susan is threatening to put my red sofa in the newly-converted-to-holiday-accommodation barn. I am, of course, fighting a rearguard action! Literally, as I have worn a depression in this settee which perfectly suits me. Though it is....rather difficult to extricate myself from...

The red sofa has become my office, my bookshelf, my occasional dining room. From it, I can see through the old kitchen window (positioned in the manse so the minister could see the kirk), and the telly. The stove is comfortably six feet away, there's natural light from the window behind me. Its arms are flat and on one side accommodate phone and charger, cup of coffee and mains extension. On the other is the pile of books I'm currently engaged with.

Le Carre's Our Kind of Traitor is really a novella and in some ways a small masterpiece. Full of rage and wit. Eileen Lupton's Indie Publishing is being dipped into for the sake of an upcoming project. Moral Combat is  rumbustiously written in Telegraphese by Michael Burleigh, and is a kind of fallback read. He's got a bit of an AJP Taylor complex. Laurence Hemming's Benedict bio I haven't started, the brilliant Alan Furst's Night Soldiers is, in retrospect ( struggled with it a bit) a magnificent achievement. His NKVD protagonist really haunts the memory.

Elsewhere, there's the owner's manual for my motorbike, the Moto Guzzi Bellagio, currently and reluctantly for sale.  The humanist magazine Humanitie, the new edition of Q, and The Diamond Age by Neal Stephenson,  one of my favourite writers. I read it at the insistence of my son Magnus, having abandoned it previously as 'too steampunk' in its early pages. Just finished, and I found it quite profoundly affecting, despite its many faults and intrinsic messiness. Cryptonomicon is Stephenson's best book, but the Baroque Cycle is just astounding in its scope (and the fact it was written in longhand).

Then there's Jonathan Franzen's much-vaunted Freedom. The first chapter is wonderful, but it's Anne Tyler in HD, isn't it?
Posted by Tom Morton at 8:48 am

Your relationship with your sofa reminded me of a recent Daniel Kitson play '66a Church Rd'. I caught it at the Tron in May. It's a lament on having to leave a flat he has grown so attached to. Brilliantly performed by Kitson it's both funny and touching. If it does the rounds again you may want to consider it . :0)