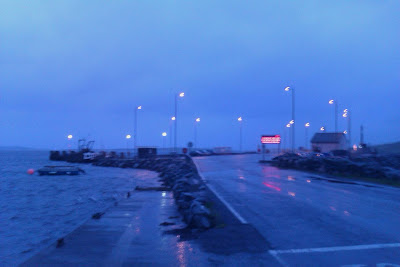 Huge equinoctial gales hammering Shetland, and the NorthLink ferry to Aberdeen cancelled due to, ahem 10-metre swells in the Fair Isle Channel. I remember being on one of the old boats (P&O's rough ex-Baltic ferries, the St Clair and the St Sunniva, which would have set sail in a typhoon, if we had typhoons) for 36 hours, hove-to in Scapa Flow, aged Saga tourists having been previously hurled about the restaurant like brittle, noisy squash balls.

These days it's a bit more civilised. NorthLink just don't set sail when it's hideously rough. Some Shetlanders moan about this, but frankly, I don't mind. Especially when, as is the case tonight, I'm booked on the early morning flight out of Sumburgh...

Famous last words, but wind doesn't tend to stop the 'plane. Just makes for a shorter take-off and a bumpier landing. Or as I once said, on the 'plane you spend an hour thinking you're going to die. On the boat...it's 14 hours or more, wishing you were dead.

The picture is the Toft inter-island ferry terminal tonight, taken while my daughter was at piano lessons. The notice says that the 8.15pm ferry to Yell WILL sail. God help all aboard, I say...meanwhile, it's a Black Bush (my new favourite blended whisky in the whole wide world) and an evening enjoying the house vibrating in the  wind., while the waves crash over the cars, and the new sheds come apart, bit by bit. Weather like this tells the truthful tale: do you really love being in Shetland, or just the idea of it?

Published with Blogger-droid v1.4.8
Posted by Tom Morton at 8:42 pm