Glasgow in the autumn, Lathones in Fife and back to Shetland (briefly) 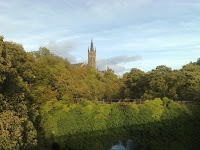 Autumn's my favourite time of year to be in Glasgow, probably to do with memories of University and the beginning of term, all that hope and expectation. Anyway, it was good to be in the Dear Green Place as it began to turn red, yellow and brown, with James and Martha. Susan, alas, was stuck in Shetland as we were unable to find anyone who could look after the redoubtable Lulu. It was her turn to stay at home, honest!
We stayed, first of all, at the new Travelodge at Braehead (the Krankies were also in residence)and visited what must be the worst Pizza Express in the world, at the XScape indoor skislope thingy. Rooms were OK at the TL, but the promised WiFi didn;t work and the breakfast was an abomination. Thank goodness for IKEA's cheapo pre-opening canteen offers: £8 for full ('Bigger') breakfasts for three, and unlimited free coffee. We also had one night at the Etap, atop a car park in Springfield Quay. Cheap (£32 a room) but dirty and pitched somewhere between a student hostel and a prison. Vaguely threatening clientele, too, though the fresh-baked croissants were good. Still and all, we saw family and old friends and generally absorbed ourselves in Glaswegiana. Ate Japanese, Indian, Italian and Italian and Italian. The Battlefield Rest was magnificent.
From there on in, it was luxury all the way: The Inn at Lathones, which hosted the Tom Morton Acoustic Showcase (Kevin McDermott and Esther O'Connor, with the Malt and Barley Revue next day) was absolutely lovely. Great rooms, superb food and the proximity of St Andrews. A million thanks to David, Nick and Jocelyn. A dash for Aberdeen, a rock'n'roll trip on the boat (gusting severe gale nine, but southerly, so that was OK) and we were home.
And it's good to be perched on my red sofa with the Rayburn roaring and Lulu snoring. Have to go away again next week for a trip which will take in Belfast, Cookstown, Ullapool, Glasgow, Stornoway, Rodel in Harris, Inverness, Aberdeen, and Nairn, but that should be it before Christmas. God willing.
Posted by Tom Morton at 8:23 pm

ha ha etap! ... knew it..hope you didn't hit your head on the bunk above the bed!

Ah Tom - Braehead you could have popped round for a cup of coffee and maybe a nice eggs benedict with my recently perfected poached egg technique! And of course a wee play of famous blue raincoat! LOL!! Enjoy your travels and I know the Highland hospitality will be excellent.