The expensive grimness of Aberdeen hotels 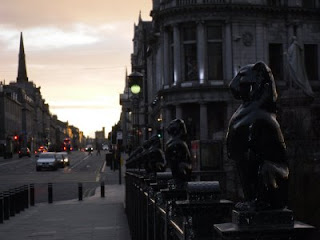 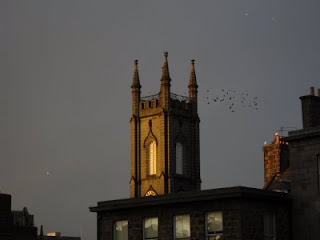 Took these pictures (Aberdeen remains one of the most atrractive cities in the country, complete with beach, harbour and great glowering granite edifices) last night while scouring Union Street for food (prior to settling on the honey chilli chicken) followed by an extremely disturbed night thanks to the propensity of Aberdeen Young Folk for partying into the not-so-small hours. It was 5.30 am before the last Bridge Street revellers went home. Student night, apparently.

Hotels in Aberdeen are a problem. They're all hideously expensive, even the rubbish ones, especially during the working week. Oil still shouts that it's got an expense account here. So the truly crap place that I'm staying - part of a big chain, dirty, shabby, scruffy, you name it - is £75 a night, Monday to Friday.

In the course of the last seven years I've stayed in almost every hotel in Aberdeen, and in terms of value for money, the best is probably the Premier Inn opposite the Lemon Tree.Same price as Travelodge but on a different planet for quality and service. The two chains nearly merged last year but in the end, it all fell apart. Good.

The Carmelite is a would-be boutique hotel with a nice foyer and restaurant but, in my one and only stay there (£60, cancelled flight, weekend rate) has half-heartedly tarted-up rooms from its previous incarnation as the Grampian. The Malmaison, just opened, will be like all the other Malmaisons - very comfortable, pretentious and overpriced - but it's beyond my reach expense-wise. The Patio down at the beach is, in its cattle-class rooms at least, a badly-designed, very noisy echo chamber. Ludicrously expensive if you're not fossil-fuelled

There are other establishments, of course - too many to mention in a single post. The pub-with-rooms where, when I complained about the absence of a toilet seat, I was accused of stealing it. The truly threatening bed and breakfasts (there are several, and none are cheap). The Copthorne - now getting to over £200 a night, I'm told -used to be nice but very 1970s and too dear to eat in. The Caledonian is OK but again, ridiculously expensive and worn at the edges.

Holiday Inn Express is clean, tidy and well-run but very difficult to get into. I like their no-nonsense all-you-can-eat breakfast too. If you can afford £150 a night. Unbelievable. The Station Hotel by the harbour is a warren and rather frightening.

Anyway, if you have to, go for the Premier Inn, or, if money's no object, Simpson's (which is ultra-dear) or the Malmaison. But for whom is money no object these days?
Posted by Tom Morton at 12:05 pm

if Simpsons Hotel is as nice as their bar area then it will be a good hotel.

Although I live just around the corner so would be pointless me ever staying there.

Hotels in general can be such a lottery, if money (and of course time and location) are no object I can heartily recommend Glasgow Malmaison, Ullapool's Ceilidh Place and The Calgary Hotel on Mull. Sorry,that's no help.

The ETAP in Glasgow is bad, but the Traveldodge in Aberdeen is even worse.

Ceilidh Place is marvellous, and there are other great hotels...if you can afford them or someone else is paying. Hilton in Glasgow is very good, and yes the Malmaison chain is tres chic.

Thoughts turn inexorably once more to camper vans....No! No!

I fancy a camper van...why are you now so dead against them?....my wee suzuki GN125 passed its MOT this morning!!! woo hoo

Apparently my pal stayed here and there really were rats! Also two people could not stand in the room at the same time!!

I lived in Aberdeen most of my life, then evetually left and lived in Edinburgh for 3 years, now recently have moved back to Aberdeen for a short while. I have observed the absolute contrasts in these two cities.... I am shocked how utterly crap, under developed, miserable and ugly Aberdeen is compared to Edinburgh.

I hear the same promises and excuses from Aberdeen City Council, i have been hearing them all my life, still Aberdeen remains thick, black and greedy with oil, its cold grey mechanical beast. Aberdeen only benefits those who WORK IN THE OIL INDUSTRY ! ..and then those who reap its rewards and eat its crumbs...hotels, bars, casinos, nightclubs and restaurants.

It is a pleasure to live in Edinburgh, Aberdeen seems to be for working and raping for maximum profit... the bells in Aberdeen city center have been broken for ages, the place looks run down, the parts where it isnt are polished, trendy and boringly glam.

Aberdeen is a miserable crap hole, and it has been run by bad groups of people for a long time, they dont care about this city and the health/happiness of their citizens - they SOLD OUT ALONG TIME AGO !

I cant wait to get back to Edinburgh, i pitty those of you in Aberdeen who are not rich from the oil, because life in Aberdeen is tough, expensive, grey, miserable and full of empty promises ! ...but hey at least the councillors have got a lovely new shiny white stoned, golden flagged building to work in ! ( thats what is important, isnt it ?! )