End of the Longest Day, and the tragedy that blighted it 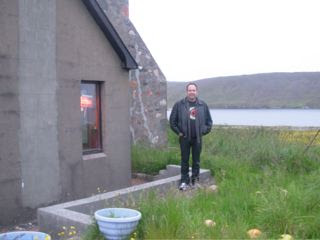 Well, it's midnight plus 30, and that's just about the end of my longest ever day's broadcasting...six programmes (albeit only a few minutes in four of them, longer in Archie Fisher's Travelling Folk and of course the full two hours of the TM Show itself.

A wee Laphroaig and the wondrous surprise of finding Jean Pierre Melville's Le Cercle Rouge on the telly..ahh...

More pictures tomorrow with a bit of luck. This was taken at 11.00pm at the Radiocroft, just before the first technological failure of the day, as the brand-new, multi-billion electronics of BBC Scotland's Pacific Quay failed abjectly to work. So it was telephone quality for my interview with old pal Ricky Ross, host of the Late Lounge.

The show on Victoria Pier went really well, I think - special thanks to the Mark Laurenson Band, Jordan Ogg and Gillian Isbister, my musical guests, and everyone else who helped.

But I can't put the day away without mentioning the tragedy that shadowed it. I took my motorbike into Lerwick today because this is one of motorcycling's biggest days in Shetland, with the beginning of the Simmer Dim Rally and the arrival of hundreds of bikers from all over the world.

However, 22 year old Mark Leask from Scalloway was killed in the morning, apparently on his way to the rally campsite at Vidlin. And despite all the music and performance, all of the activity, he and his family were never far from our thoughts.
Posted by Tom Morton at 12:27 am