Blue skies and the tale of Logan Mountstuart 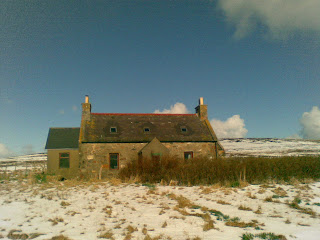 The snow won't let go. But gradually, in the face of inexorable spring, it is loosening its grip.
The Radiocroft is not looking its best at the moment. I'm toying with the idea of painting it country-cottage white, but I quite like the way it half-merges with the ground around it.

Which sounds, I fear, a little like mid-period Logan Gonzago Mountstuart, protagonist of William Boyd's absolutely superb Any Human Heart:The Intimate Journals of Logan Mountstuart. I'm currently re-reading it, and this 20th-century-spanning tale of one man's complex, messy, name-dropping, tragi-comic life remains both comforting and disturbing.

In fact, it now has me poised on the edge of purchasing William Gerhardie's 'lost' novels Doom and The Polyglots and venturing into what's left of Cyril Connolly's published works, which is probably not advisable. Gerhardie and Connolly were apparently the models for Mountstuart, who made his first appearance as a 'source' for Boyd's hoax biography
of non-existent American abstract expressionist Nat Tate. Complete with photograph.

As if I don't have anything better to do! The Malt and Barley Revue's premiere is approaching rapidly, and I still can't play the ukulele properly.
Posted by Tom Morton at 9:20 am