Winter at The Radiocroft. In spring. 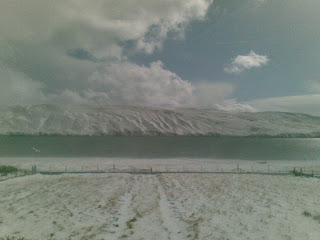 Easter Monday, and it's not just snowy, it's bitterly cold and very windy too. Still, so far the power's on and all the digital gubbins is working, so I'm fit to broadcast. Have to go into Lerwick later anyway, to pick up Magnus - he's flying north for the week from Glasgow - but if The Radiocroft is working, it's as well to use it.

Just booking a holiday in Spain for July, and looking at pictures of the Costa Brava in searing summer, it's hard to believe in a world of gazpacho, tapas, Sardanas and San Miguel. But it exists! At least, I think it does.

Anyway, this is the first real snow of the entire winter, and it's arrived just as spring begins. And for the first time I have a car which lacks snow tyres.
Posted by Tom Morton at 11:27 am

good afternoon Tom,
it looks cold there.
i am enjoying the sunshine
here in Japan waiting patiently
for the cherry blossoms to bloom.
tonite, i am hoping to listen to your show as i think i was able to successfully download Real Player for my friend`s computer.
and i am keeping my eyes open for
any Cremona\Cremola/Cremora Foam or similiar drink.
i have seen a shop somewhere in Osaka which still sells candy and that kind of stuff from the past.
kevin