Fear and loathing on the A9 southbound... 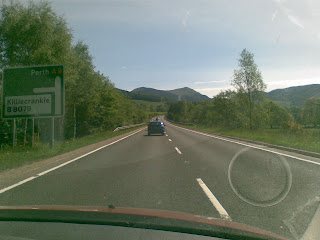 This is just an example snap of the trip south on the Inverness-Perth stretch of the A9, which I've been driving for 35 years and remains a nightmare of frustration and terror, no matter how much meditative calm I try to instil in myself. Caravans! I will never have one again. Camper vans! I'm selling Gloria forthwith. Motorcyclists! Are they/we all deranged? People in big off-roaders who think they can simply push other people out of the way! People in open-top sports cars wearing ridiculous hats to avert frostbite (the people, not the sports cars).
Folk who drive at 45 mph. Folk who try to overtake by increasing their speed to ONE mph faster than whatever they're overtaking. People who go from the inside to the outside lane at the last minute to turn right.
Have to say I'm impressed with the Citroen C4 I currently sort of own...fantastically frugal (diesel), and thank goodness in the current fuel mania. And fast enough to, at one point today, rattle past a tardy Aston Martin Volante with absolute Gallic contempt. Zoot Alors!
So, anyway. Safely in Glasgow, only to discover that I've locked the folding bike and left the keys in Shetland. I'd snip the lock but it's a Kryptonite and harder than a microwaved lasagne crust.
I guess I'll have to walk. No driving in the Dear Green Place. It's even more frustrating and terrifying for car conducteurs than the A9.
Posted by Tom Morton at 1:09 pm

The main problem with the A9 is that because it is built to such a high standard, ie no sharp turns or roundabouts and bypasses all the towns and villages, people feel that they should be able to maintain motorway speeds on the whole 108 mile stretch between Perth and Inverness. This, of course, is not possible given that 74% of this stretch of road is single carriageway. Drivers get frustrated and start taking risks. Due to the quality of the road, closing speeds between an overtaking and oncoming vehicle are usually around 150mph. Drivers run out of road rappidly at these speeds.

Having said that, I drive from Edinburgh to Inverness and back Monday to Friday and think the road is safer than the A90 between Dundee and Aberdeen (my old route). That road falls well below the standard of a modern dual carriageway trunk road. Gap junctions, lots of tractors etc. Very scary, a road which I'm sure you know well.

You want to drive in Abu Dhabi - truly terrifying, as people overtake on both sides and typically leave around 2 feet of a gap between your car and theirs at 70 mph!!