Rescue is at hand...but not from broadband hassles 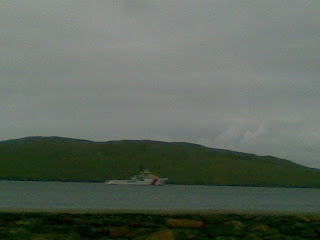 Biggest ship I've ever seen anchored off Hillswick - the coastguard tug Anglian Sovereign. If the weather had been nicer I might have been tempted to take a paddle round her in my inflatable kayak....but it was horrible.

Meanwhile, BT still haven't fixed the broadband to the Radiocroft, 48 hours after it failed. And because of the power failures on Tuesday, which took the show off air for over an hour, I'm having to broadcast from Lerwick for the foreseeable future. It's understandable, but infuriating.
Posted by Tom Morton at 9:19 pm