Dan, his long-distance Raleigh Chopper, and a tale of three old postcards 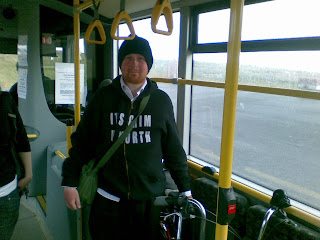 It's amazing the folk you meet on the bus. This is Dan Godfrey from Newcastle, who was waiting at the Hillswick bus stop this morning with his purple Raleigh Chopper bike (complete with Darth Vader bell!) heading for Lerwick.
I nearly crashed the car the other day when I saw Dan (dead ringer for Badly Drawn Boy) toiling up the hill out of Lerwick with his Chopper, heavily laden for touring with a mighty rucksack. I mean, who goes bike touring on a Raleigh Chopper? The answer became clear after a few minutes conversation: an art student does!
An art student on a mission, as it emerged. Dan was in Hillswick engaged on a project sparked off by the discovery of three old postcards in the attic of his mum's house. He had no idea what the pictures were of, though they were all coastal scenes. It turned out they were all (quite rare) 1920s JD Ratter pictures of Northmavine in Shetland - Hillswick, the Grind o'da' Navir at Eshaness and the beach just round from us, with the Drongs in the background.
Before working out where he might have to go, Dan decided to travel, by Chopper (and train and bus, it should be said) to wherever the locations were, and try to recreate the same scenes in colour and black and white. He was loaded down with three stills cameras and a video camera, and the Chopper trip was filmed too, using special brackets on the bike.
He had cycled, he told me, the entire 37 miles from Lerwick to Hillswick, though 'it nearly killed me'. I'm not surprised. Choppers are not built for long distance work. Or Shetland winds and hills.
Anyway, he'd had a successful trip, finding and photographing all the scenes he sought - none of which had changed much in 80-odd years. When I met him he was heading home. I imagine a website and exhibition will be the result of all this in the
long term. Oh, and why a Chopper? 'I'd just always wanted one.' Fair enough!
Posted by Tom Morton at 11:10 am

If there is a website or some follow up, can you let us know?
I love old photos and this sounds like a great project. A few years ago I found an old postcard of a Geneva street scene. Your post has given me an idea....

excellent story! let me know if you ever receive notice of the 3 Postcards website.

kevin
ps. it looks to be the june gloom is burning off here in the south bay. time to get out the rollerskates.
today i am heading north to Marina del Rey to hear a "tropical" band called Uncle Monkey at Fisherman's Village.

A lucky man to have a Chopper! I requested one for my birthday as a nipper and received.... a horrible, little, yellow, Chipper instead, the little brother of the Chopper... I'm still scared to this day twitch twitch and have no friends :(

I hope Dan had the statutory cloths-peg and cardboard on the back wheel!

Hi Tom,
It's Dan here.
Thanks for the coverage (both in print and on air).
I still haven't printed or scanned the images (let alone decided how to present them) hence the lack of updates.
I was thinking of asking at the gallery in the Shetland Archives in Lerwick if I could display it there next summer, but haven't approached them yet.
I also considered cycling the other half of the journey (Hillswick back to Lerwick) whilst up there just for fun.

But..., sadly, on Tuesday the bike was stolen!

Tied up while I went swimming for an hour, it was victim of a bike-thievery spree and may be lost to the criminal underworld of Newcastle Upon Tyne forever!

I've just ordered a new (red) one that I may paint yellow (to make it more distinctive if anything terrible were to happen to it), so the journey may still be possible even if on a different Chopper.

I'll keep you posted if anything exciting happens!